The Java Card Form is a collaboration of companies from the smart card, secure operating system, and secure silicon industry, working together to promote and develop Java as the preferred programming language for multi-application smart cards and secure devices.

To keep up-to-date with our news, make sure you sign-up to receive an email reminder about new posts – go to “FOLLOW NEW POSTS VIA EMAIL” in the right hand column and click on the Follow button.

The Java Card Open Configuration Protection Profile version 3.1 has been certified and published under the German Scheme by Bundesamt für Sicherheit in der Informationstechnik (BSI).

More details about the new PP can be found on the BSI website: https://www.bsi.bund.de/SharedDocs/Zertifikate_CC/PP/aktuell/PP_0099_0099V2.html

After 4 dynamic years at the helm of the JCF, Volker Gerstenberger has stepped down as Business Committee Chairman and President of the Forum, as he will no longer be participating in the JCF.

Jean-Daniel Aussel from Thales was unanimously voted into the position of Business Committee Chairman and JCF President by the Members and began his new roles at the beginning of April.

Find out more about Jean-Daniel’s intentions for the future of the JCF here.

The work of the Java Card Forum is never complete – even before the latest Version of the Java Card platform has been published, JCF Members are already compiling recommendations for the next Release.

Find out what the Java Card Forum is now working on.

Find out what the Java Card Forum was discussing.

To celebrate the work of Bertrand du Castel (one of the Founder members of the JCF), who sadly passed away in February 2019, the Java Card Forum (JCF) has worked with his family to initiate an Annual Award in his memory: The “Bertrand”.
During an Award Ceremony at the Plenary meeting in Bucharest, Alexandre Frey was announced as the winner of the first ever “Bertrand”.

It was with great sadness that we learned of the passing of Bertrand du Castel on February 11th 2019, a man who many see as the champion of the Java Card platform and one of the founders of the Java Card Forum. But rather than lament his demise, the JCF want to celebrate his life – his dedication, passion, belief and determination that brought a new operating system to life and nurtured it to maturity.

Read our tribute to the great man here.

Java Card for the Internet of Things

While device growth brings transformative effects to several industries and to people’s daily lives, it also induces an additional level of system complexity to the infrastructure that will handle device data.

Release of Java Card 3.1 provides the Foundation for IoT Security

The Java Card Forum (JCF) and Oracle proudly announce the release of Java Card 3.1, which is a major milestone platform update, facilitating the development of advanced security services for existing mar-kets and the emerging Internet of Things (IoT) sector. The JCF have been working in close co-operation with Oracle, providing recommendations for the new specification and the release is a testament to this long-standing partnership of over 20 years.

The Java Card Forum and Oracle have released a Whitepaper explaining how Java Card technology is ideally placed when it comes to securing the IoT sector. 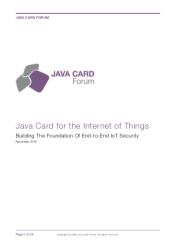 As more machines and devices become connected, there is a real concern about security and trust in the IoT sector. The JCF have produced an Infographic to show how Java Card technology not only secures current IoT systems, but also ensures future-proof end-to-end security from edge devices to the IoT Cloud.

The Java Card Forum is an industry association of companies from the smart card, secure operating system and secure silicon industry, working together to promote and develop Java as the preferred programming language for multi-application smart cards, secure devices and other execution environments.